Disturbance in the drain

In this chapter we will treat: 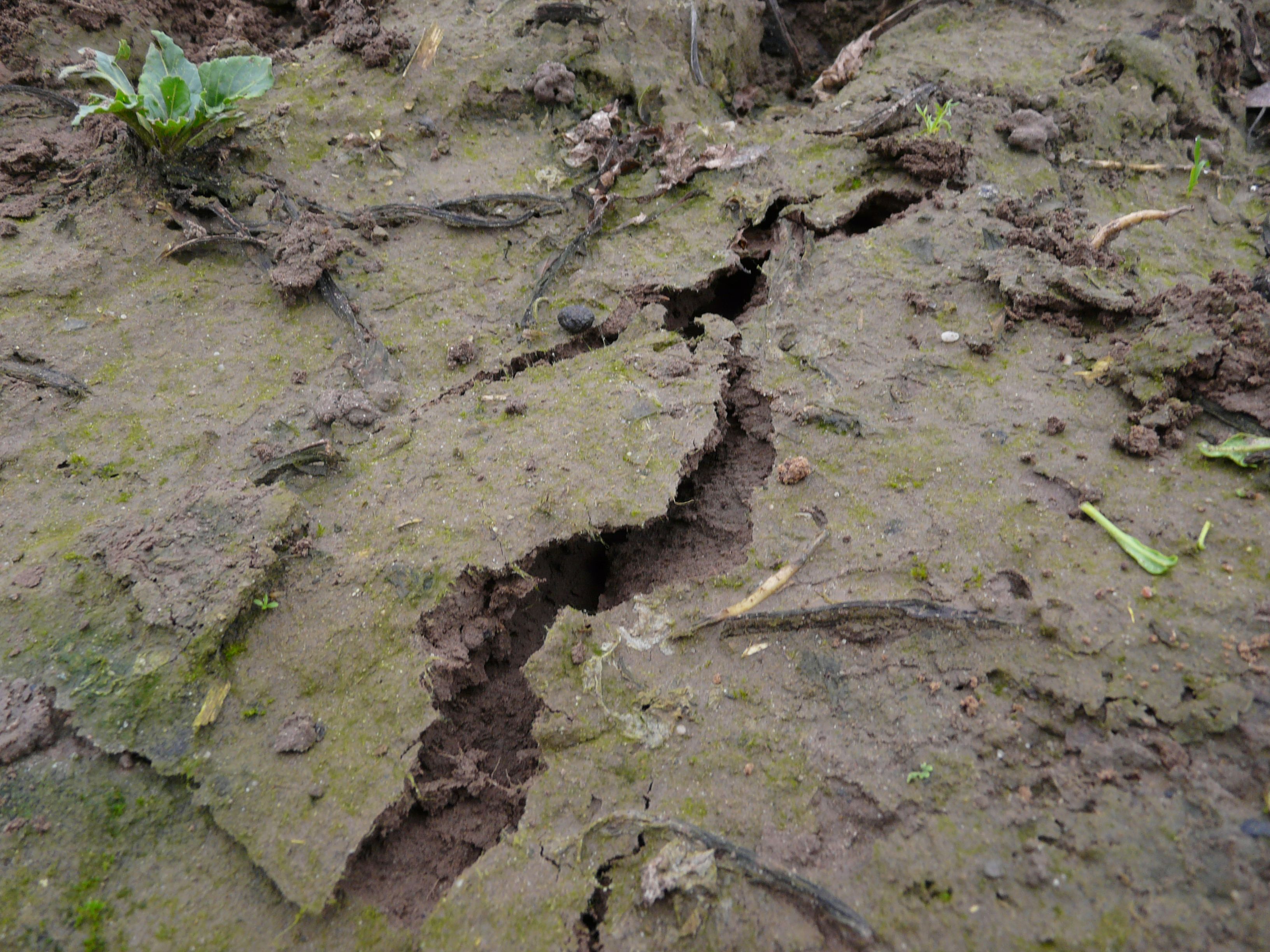 If the end pipe is carelessly coupled to the drainpipe, leakage can occur while coupling. This allows water to run underneath the drain, this can result in the soil being washed away on site. This may have the effect of the end tube sinking easily. The drain can therefore be seriously blocked. The end pipe can also subside because the outlet does not end directly above the water in the ditch, but discharges onto the side of the slope. Because of the soil washing away, the slope can easily collapse, causing the end pipe to sink. In that case, the use of slope gutters is recommended. Another solution is to use a longer end pipe that discharges directly into the water of the ditch. Often insufficient care is given to the construction of the power tube or the use of a slope gutter is simply forgotten. If the ditch into which the drain discharges is narrow, the drainage body of the drainage machine may not be able to insert deep enough. This is why the tube will be inserted slightly upward. This will slow down the total drainage of the drain and the drainage becomes less deep. When attempting to restore a protruding power tube by pushing down on the power tube, there is a high risk that the power tube will bend and will be seriously damaged. The only solution here is to excavate and properly lay the power tube.

In the winter months, the end pipe can be damaged. Frost damage is common. This can be caused by ice formation during the onset of the thaw, but also by damage to the slope due to the falling ice which has frozen to the slope while the meltwater is being grounded away. The drained water can also freeze during drainage, causing the end tube to freeze and break. This risk is high when using PVC end tubes. End tubes made from Polypropylene or Polyethylene will not freeze.

The end pipe can also be damaged during the cleaning of the ditch. A mowing bucket or slope mower, a ditch cleaner, or a ditch edge cutter can cause serious damage. Good marking can prevent this. Make sure that the extracted dredge does not disturb the free outflow of the drain. All in all, the power pipe remains a very vulnerable part of the total drain. It is absolutely necessary to check before and immediately after cleaning the ditch.

The drain itself can be disturbed in many ways or have obstructions that hinder drainage. The location is a very important factor in this. Almost all drains are installed with the aid of a laser beam at the desired level and any desired slope. During the construction, the drain may be installed under insufficient ‘voltage’. This means that the soil is not tight at that moment. The ribbed drain that comes from the roll wants to start ‘squirming’ again. These twists can occur both horizontally and vertically in the tube direction. The chance of such squiggles is greatest when using a drain made of p.v.c. Drains made of polyethylene (p.e.) or polypropylene (p.p.) hardly have this problem.

A bad location can also be the result of poor operation of the drainage machine. The construction of the machine can also be such that it is difficult to install the drain at the desired depth. The soil type and the structure of the oil can also play a role. In peat soil, for example, the sandy substrate can occur at varying depths. The drains are then placed alternately in the sand or the peat. During construction, the resistance that the drainage machine encounters from the soil varies greatly. Depending on the type of machine, the machine can therefore show a strong tendency to go up and down. This will have to be corrected by the laser control.

The reaction speed can vary greatly from machine to machine. It is, therefore, necessary to not drive too fast under certain circumstances. On clay soil, the depth control can be greatly influenced by the presence of soft clay or sand in the subsoil. This also influences the resistance encountered by the drainage body of the machine.

The ground level is often very uneven before drains are built. Certainly, when a graded plot is drained, extreme control of the machine and the laser equipment is desirable.

The cases mentioned so far mainly relate to the trenchless installation of the drains. When using a chain digger, the varying strength of the subsoil has a more limited influence on the position of the drain. When digging the trench, however, it must be prevented that soil rolls back into the trench before the drain is placed on the bottom. This also creates a less desirable location.

The location of the drain can be determined in several ways.

The use of piercing equipment is an excellent means of checking for possible drain disturbances. This can be due to material defects, sanding in, or possibly root growth. The possibilities are limited to determine the difference in height over longer distances.

When draining with the aid of a chain excavator, an open drainage trench is created. The height of the drain can be accurately determined by placing staff at various places on the drain and by reading the height on the through height measuring equipment. When draining is done with a trenchless draining machine, this method is not possible. In this case, it is only possible by placing the measuring equipment on the root body during construction. The drain must be dug up in order to check the construction. A different approach would be to measure the drain height continuously over a longer distance. However, this measuring method has some technical limitations, especially for the longer drain series. Another method is measuring step by step with the insertion of a measuring cable with a measuring head at the end. In this case, the head is brought to rest at a predetermined distance, so that the height is measured on-site. The measurement data are recorded and displayed on a graph (figure 1). The graph shows whether the drain meets the specified requirements in height.

The equipment can be used for;

If the government had commissioned the construction of drainage in the past, for example at Land Development Works, there would have been a strict requirement concerning the quality of the works to be carried out. Altitude playing a major role in this. Inspections carried out at the time showed that only 40% of the machines performed the work according to the established standards. The rest had too great a deviation in height, which resulted in an impaired functioning to a greater or lesser extent. Research into the cause showed that most of the time it turned out to be a combination of factors. Operation and construction of the machine, but also terrain and weather conditions played a role. Some of the deficiencies found were a result of the crew working the drainage machines. Poor coupling of the rollers, but often also the incorrect coupling of the power tube occurred regularly. And just as often the high speed of the machine during draining was one of the causes.

Influence on the laser installation

During the inspection, it also showed that the laser can respond to external influences. For example, the presence of a radar installation at some distance can result in the driver seeing a double signal on the display at fixed times. Power lines can also be observed. Especially at high humidity.  The influence can be minimized by placing the laser under the high-voltage line. Because the strong signals from the transmitter come from the same direction as the weaker signals, the laser receiver will now respond to the strongest signals. A greater distance from the laser also gives a greater chance of deviation. The influence of the earth’s curvature plays a role here. At a distance of more than 300 meters, the chance of deviation is relatively high. This can be calculated through the following formula:

Formula 1: calculating the curvature of the earth over a distance

High deployment of the drain

Deploying the drain too high results immediately in a negative slope after the deployment. (figure 2 A). This will run slightly downhill over a short distance. This can affect a great length, especially with drains with little slope. This can result in a less efficient discharge. Too much use of the machine is not always the cause, it can also be a result of the machine itself adjusting to the laser. The problem is easily solvable by deploying the machine a little deeper (about 3 to 4 cm) and then switching to automatic depth control while driving. This will cause the machine to slightly lift until it has adjusted to the desired level.

Checking the proper functioning of the machine

The height of a drain that has already been laid can be accurately determined with the aid of modern control equipment. A drainage machine could be checked for correct elevation utilizing a sample. To implement this in a structured and guaranteed way, the Association of Dutch Drainers (VND) is considering introducing a quality control system in which controlled machines are certified.

In addition to equipment for measuring the height or the described piercing equipment, other methods for detecting disturbances in a drain exist.

This device can view the drains from the inside. The advantage is that the situation is shown virtually undisturbed. The results are sometimes impressive and in other cases prompt further research. There are several options for image inspection. For example, a malfunction may have been found through a piercing device or with flushing. After a correct location of the fault, a hole can now be made in the drain via a bore, after which a survey can be made on site. Image recordings can be made (see photo) and recorded. For example, recordings were made of root growth, settlement, and compression of the drain pipe. The effect of cleaning can also be checked. An extended version has the option of inspecting the entire drain from a great distance through the end pipe or a control well. Through a camera equipped with lenses that are placed in a protective cover. This way an excellent inspection is possible and a good image is obtained of the interior of a drain if this is not excessively contaminated.

Back to 'Construction and Maintenance of Drainage' »

Get in touch with our dealers

Are you looking for a dealer in your area?
They are pleased to help you!

Do you have a question? Enter it here.